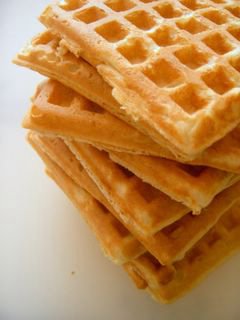 I know that I have posted about making waffles before, but I think that I finally have the waffle bases covered. Not to say that I won’t be making more waffles, but I will speculate that unless I have a startling waffle revelation – which isn’t impossible – I will probably stick to these recipes for plain, buttermilk and soudough waffles.
dskbook recommended to me in my post about my first soudough with my new starter that I try making waffles with it. I went to the recipe archives on King Arthur‘s website and quickly located Sourdough Waffles for Four.
Let me just say that this made more than four waffles. I was able to fill my waffle iron completely 6 times, and it’s a large waffle iron. You’d better be hungry if you want four people to eat all those. Hungry and not serving anything else, like bacon or saussage. I just cut the remaining waffles down into toaster sized pieces and froze them.
These were great. Really great. Easy, light, crispy.
I used butter instead of oil and reduced the amount from 1/4 cup to two tablespoons. I’d rather have my butter on top of my waffle then inside it.

How to make an ice cream cake

What is red velvet?