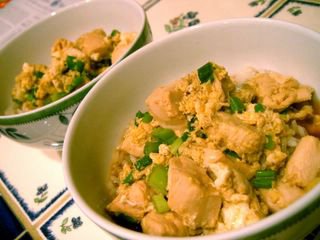 I really hate touching raw chicken.
I don’t mind cooking it and I certainly don’t mind eating it, but I would much rather handle just about any other kind of meat. Forgive me, but it just looks icky.
Nevertheless, I had to touch it to cook tonight’s dinner. I used a recipe from this month’s EatingWell magazine for the Japanese Chicken-Scallion Rice Bowl. Luckily for me, they also chose to publish this recipe online so I don’t have to retype the whole thing. It was simple to make and only took about 30 minutes until I was chowing down. I wasn’t wowed by it or anything, but it tasted good, so I’m sure I’ll be making it again in the future. My only complaint is that it didn’t look like the picture in the magazine, which led me to believe that there would be more broth in the final dish. If you’re in a soupy mood, double the broth/soy sauce mixture.

Here’s the recipe with my (minor) changes. The link goes to the original.

Combine the rice with 2 1/4 cups cold water in a medium saucepan. Bring to a boil, cover and reduce heat to low. Cook until all the water has been absorbed, 20 minutes. Let rest, covered, for 10 minutes. Chop chicken and scallions while rice is cooking.

While the rice is resting, pour broth into a heavy medium saucepan, along with sugar, soy sauce and mirin. Bring to a boil; reduce heat to medium-low.
Stir egg whites and whole egg in a small bowl until just mixed. Add chicken to the simmering broth. Gently pour in the egg mixture, without stirring. Sprinkle scallions on top. When the egg starts to firm up, after about 3 minutes, stir it with chopsticks or a knife. (The chicken will be cooked by now.) Divide the rice among 4 soup bowls and top with the chicken mixture.
Makes 4 servings, 1 1/2 cups each.