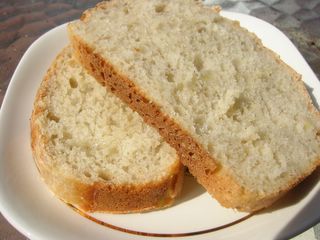 I pulled my starter out of the fridge this morning to feed it. After I removed a cup from the dormant starter, I wondered if I could just use it to make a loaf without feeding it. I didn’t entirely expect it to work, so I threw in some stuff that was sitting around and I didn’t really knead it. Reflecting on this now, I realise that had my bread failed, it would have been because of my self-defeating lack of effort. But it turned out pretty well.
I mashed up a ripe banana with a large pinch of salt, tablespoon of sugar, a few shakes of cinnamon and a splash of milk. I added the cup of starter and about 1 1/4 additional cups of all purpose flour. I stirred everything together, covered the bowl with plastic wrap and let is rise for 2 hours. I must admit that this mixture definately did not double in size as it sat, possibly because the starter was cold to begin with. Perhaps I should have warmed the milk.
I then “kneaded” the dough (read: prodded it four times) with the back of a spoon before turning it out and pressing it into a greased loaf pan. Again, I let it rise for nearly two hours. Again, I don’t think it doubled, but it did rise a bit. I baked it at 450F for 20 minutes.
The final loaf turned out to have a hint of banana and cinnamon flavor. It was surprisingly light and soft, with a very nice, crisp crust of the sides and bottom. I had no expectations and was pleasantly surprised. I would definately try something similar again – especially because I suspect it will make great toast in the morning.

2nd place in baking contest is second to none

What does it mean when an ingredient is “divided”?