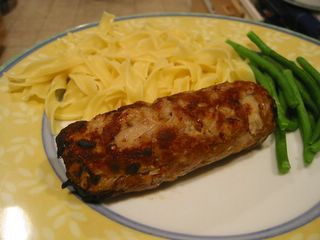 Â If you happen to live in the US and own a television, perhaps you have seen the new reality show on CBS, Wickedly Perfect. Say what you will about reality television, but I think that this is a pretty fun show. The premise is to have a bunch of Martha-Stewarts-in-training compete for a book deal and several TV spots. Yeah, the requisite whining and moaning takes place, but instead of breaking that up with bug eating contests, Wickedly Perfect uses cooking, construction and interior decorating.

My favorite contestant, Mychael, a professional chef from San Francisco, was voted off last week. The other people seemed to be threatened by her because she was an excellent chef. I did not personally sample the food she prepared on the show, of course, but her dishes looked great and there were certainly no detractors when it came to compliments.

Bearing this in mind, I took advantage of the fact that CBS posts a “how-to” for every project on the show and undertook to make Michael’s Wickedly Perfect Turkey Apple Sausages . And here are the photos of my endeavor:

I decided to make several smaller sausages, instead of Mychael’s two giant ones, but followed her recipe to a T. After mixing the sausage, I wrapped them in foil very tightly in preparation for poaching. It was not difficult to wrap them, but I recommend using big sheets, just in case. 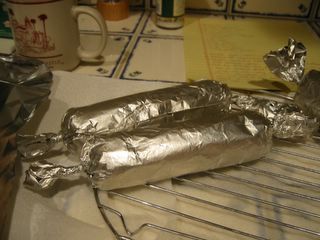 After poaching them, I let them cool for a bit and unwrapped them. 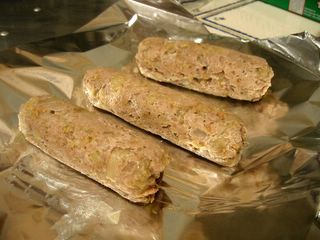 At this point, I wrapped half of them in saran wrap and froze them for later. The rest of the sausages were put under the broiler, turning every couple of minutes to prevent burning.

The finished sausages were served with buttered noodles and green beans.

The sausages were really good and the method was very simple. I intend to try using this method to make other types of sausages in the future – I can hardly wait for the summer grilling season!

Â Fill a large roasting pan with about 4-5 inches of water and bring to a boil on your stove. Place oil in a sautÃ© pan with onion and apples and cook until tender (about 10 minutes) and place in a large bowl.
Combine all remaining ingredients into the bowl and mix.
Place two large pieces (approx. 18″ inches) of aluminum foil on your counter and spoon out the sausage mixture, dividing equally between the two sheets of foil and shape into a slender sausage-like form (14 inches long by 2 inches wide). Next, pull one end of the foil above the mixture and using a straight edge such as a cookie sheet, tuck the mixture so that you remove any air and twist each end to secure and create a very tight casing for your sausage.
Poach the foil wrapped sausage in the water for about 15 minutes. Let the sausage cool, remove the foil and then grill or pan sautÃ©.