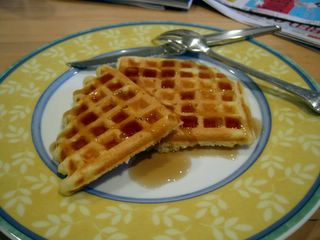 This morning I made brunch for my parents using the waffle iron my mother got for Christmas. I believe their old waffle iron was at least ten years old. It worked, but had a variety of problems including the lack of an indicator light of any sort. It was difficult to tell how long it needed to heat up and when the waffle was finished cooking. I have vivid memories of waffle-making attempts when I was in school: opening the iron too soon, resulting in half the waffle stuck to the top or the iron and half to the bottom.

I used an approximation of the America’s Test Kitchen recipe for Buttermilk Waffles. I was originially going to make the waffles from my Fannie Farmer cookbook, but decided to make the switch after finding some buttermilk in the fridge. I say approximation because the ATK recipe called for 1 tablespoon of cornmeal to give the waffles a bit of extra crunch, but I cut it to 1 teaspoon because my mother isn’t a fan of cornmeal and I was worried about the waffles taking on its flavor. I also cut the butter slightly. The waffles turned out very well. ATK states that the best waffles will result from a thick batter (the Fannie Farmer recipe is thick as well), but I think I might try a thinner batter next time just to see how the waffles turn out as a point of comparison.

Here’s the recipe I used this morning. Remember to up the cornmeal and double the butter to 2 tablespoons if you’re interested in getting the original recipe.

Combine egg yolk, buttermilk and butter in a bowl.

Combine flour, cornmeal, soda and salt in another.

Add wet ingredients to dry mixture and whisk together. Fold in egg whites.

Spread batter on your waffle maker and cook according to its instructions.

Serve on a warm plate, freshly made.