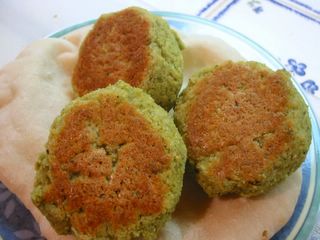 I spent a lot of time thinking about this month’s IMBB, hosted by Cathy over at my little kitchen. Typically when I eat beans, they are of them plain or refried with hot dogs variety. It wasn’t until I reached into my fridge, looking for a snack, and pulled out some hummus that it hit me: chickpeas.

My first thought was to make hummus. I figured that with a theme like Beans, other people might be making hummus, too. I opted for falafel instead – besides, I already had pitas.

I love falafel, but they’re not the healthiest things. The ingredients are super healthy, but they’re traditionally fried. This makes them nice and crispy, but I wanted something less greasy so I decided to oven “fry” mine. You might also notice that they’re a bit greenish, which is a result of using fresh parsley and cilantro in the recipe rather then dried. I won’t discriminate against falafels of different colors as long as they all taste good.

This recipe originated on Food 911 and made about 24 golf-ball sized falafel patties. I served them on pita bread with cucumbers, tomato, lettuce and a combination of hummus, tahini and sweet chili sauce. They froze really well and heated up in the microwave in just a minute. I would definately make them again in a heartbeat.

Drain and rinse chickpeas and combine all ingredients in a food processor. Pulse until smooth and well-combined.

Shape into large, round tablespoonfuls and place on baking sheet. Bake for 15-20 minutes, or until dry and a bit firm to the touch.

Note: Be generous with the salt and pepper as you’re making them. The first batch I made was underseasoned.

If you want them to be golden all over, I recommend flipping them halfway through baking or switching your oven to broil for the last minute. I tried spraying them all over with cooking spray and it had very little effect. My tasters actually prefered the ones that I hadn’t sprayed a second time.

Update: I have since made these successfully using canned chickpeas, although I do think that the dried are the best way to go if you can remember to soak them ahead of time.