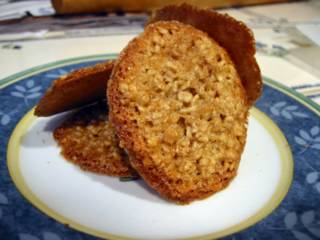 My second venture in Healthy Homestyle Desserts is Orange Oatmeal Crisps. I chose these to go with some Blood Orange Sorbetto that I made (which will get its very own post once I serve it).

Combine oats, corn syrup and oil in a small bowl and mix well. Combine flour, baking powder and zest in a large bowl.

Beat together egg whites, sugar and salt until frothy, about 2 minutes with an electric mixer. Add vanilla and beat until fully incorporated.

Drop teaspoonfuls onto parchment lined baking sheets and bake for 10 minutes, or until cookies are golden all over.

The first two batches I baked were WAY underdone because the original recipe called for only 4 minutes of baking time. Keep baking these guys until they are golden brown all over.

I also recommend using parchment paper and not a Silpat to promote even baking. These just aren’t the kind of cookie to hold up if its chewy. Yes, I did bin all the ones that were under done.

I would also recommend adding more orange zest if you want a more orangey cookie. These weren’t terribly orangey, but it didn’t bother me too much since I’m serving them with orange sorbet.