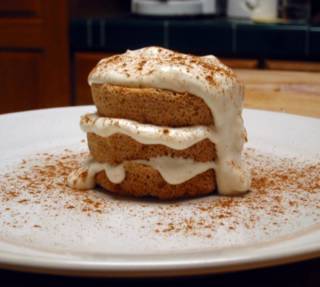 As I have been getting into the holiday spirit quite a bit this year already – cookies, cakes, eggnog – I decided that for this round of SHF I would do something light that I wouldn’t feel guilty about eating. Angel food cake was the obvious choice – you can’t get a heck of a lot lighter and still be eating something that counts as food.

But spiced angel food cake? I had never heard of such a thing. I think I’ve seen chocolate ones, but I’ve certainly never eaten one. I had never actually made an angel food cake before, either. I figured that since I have made meringues and various other whipped egg white dishes that it couldn’t be too difficult. And I was right.

I made an individual Spiced Angel Food cake. I baked it in a leftover aluminium tin, as I had seen on a cooking show once. What the tin held before, I have no idea. Maybe beans. Maybe tinned peaches. I’m sure it wasn’t angel food cake, though. I had also originally thought to glaze the cake, but decided that layers were more attractive. I mixed cinnamon, cloves and powdered sugar into a bit of whipped cream for the filling. If you are watching those holiday calories, however, you might want to try a low-cal whipped topping instead.

Here’s the recipe. It makes a little more than one tin worth, but I say just pile it in.

Preheat oven to 350F. Find a tin about 3 inches in diameter and three inches high. Any aluminum tin will work, even a cut-in-half soda can (which I have used before).
Sift together flour and spices
Whip egg white with electric mixer until frothy.
Add vanilla and pinch of salt and beat until soft peaks form. Add in sugar and beat to stiff peaks.
Fold in sifted cake flour and spice mixture gradually. When combined, pour into ungreased tin. Bake for 20-25 minutes, until cake springs back when touched.
Cool upside down on a wire rack.
If desired, before eating, slice and layer with Cool Whip or whipped cream. Add cinnamon and ground cloves to taste before layering.

Follow directions as above, but bake for 45-50 minutes in ungreased tube pan.

You may want to increase the nutmeg content of the full size cake, depending on your tastes. I would also recommend replacing the vanilla with almond extract and adding a teaspoon or so of cardamom in place of the other spices as a variation.